The rapid rise in interest rates poses growing challenges for the real estate industry: Whole groups of buyers are leaving the apartment market, institutional investors have adopted a wait-and-see attitude, prices are softening for the first time in years, while the pressure on the residential rental market keeps growing at the same time. Social tensions are likely to intensify.

Interest rates have reached their highest level since 2011. At the same time, the inflation rate remains on a very high level for now. The increase in financing costs in combination with higher costs of living has moved the idea of homeownership out of reach for many households. Initial market responses are now becoming readily apparent. Germany’s second-largest real estate financing platform reported a drastic dip in revenues. The number of customer-side requests for information has dropped by a third. Finance portals are particularly hard hit. Savings bank and cooperative banks have also reported a plunge in demand. It is a clear warning signal, even though most of the property indices do not yet show significant price drops. According to received scientific wisdom, it can take up to two years, depending on the market segment, before an interest rate hike is fully reflected in prices.

As far as apartments go, we suspect that the market has split into at least two parts. The segment of rather affordable apartments will probably be hardest hit by price reductions because it will see the swiftest decline in the number of buyers. By contrast, the effects will be less dramatic in more expensive areas because those who buy here have an easier time coping with higher monthly payments while also having a greater need to protect their wealth against inflation.

The net loss in the number of buyers on the market will further intensify the demand for rental apartments; which in turn means that rent rates will keep going up, with rent increases by 10 percent and more already recorded during the second quarter of this year. Moreover, the combination of elevated construction costs and higher lending rates makes it reasonable to assume that building activities will drastically decline. As a result, relief for the strained rental housing market cannot be expected to come from the supply side. Apartment buildings are subject to two converse effects: On the one hand, prices (and initial yields) are coming under pressure because of the increased interest level, whereas higher rent rates tend to push up prices, on the other hand. However, the rise in interest rates was exceptionally brisk while rents, by contrast, will go up at a more measured pace. While assets are quickly pushed onto the market in large numbers at present, many sellers have yet to accept the change in pricing. Among scholars, the phenomenon is referred to as “mental accounting”: Few are prepared to accept losses, even if doing so would be economically sensible.

We assume that many investors will keep waiting to see how things develop. This is particularly true for executives in permanent employment: Anyone not buying at this time will have no trouble defending the decision before the relevant entities. No one wants to be the last buyer to pay yesterday’s prices. Those who keep opting for further purchases at this time run a high risk of having to justify their decisions later on.

The looming recession is also threatening to have consequences for the real economy. Expansion plans are put on the back burner, which in turn reduces demand for office accommodation. Those who rent new office space now are usually responding to lower space requirements as more people work from home. It is another market segment that is subject to diverging trends: In order to motivate your employees to work in-house again, you have to offer them premium accommodation in good locations.

The outlined situation of conflicting factors implies massive ramifications for property developments. Sales will slow to a crawl, which in itself will generate higher interest expenses as the marketing phase drags on. Accordingly, developers are keener now to negotiate fixed-interest periods. We have noted a renaissance of the cap, meaning an interest ceiling in the form of an option that protects borrowers against interest rates in excess of a predefined limit. Prices for interest rate caps have soared. To save costs, developers will therefore buy caps only for prohibitive interest levels, meaning interest expenses they would be unable to cover from their own funds.

Rollover financing, and sometimes even current financing arrangements, often necessitate extra equity injections whenever profits have evaporated and the investor’s risk margin has been used up. It should be remembered that only the second key lending rate increase by 75 basis points to 1.25 percent on 8 September 2022 actually generated costs, because the EURIBOR had been negative up to that point. But there is reason to expect further interest tightening by the European Central Bank. Inflation is a far cry from being contained, and the wage-price spiral has only started to gather momentum – while the monetary policy is, sadly, slow to respond. It is no secret that a number of property developers will not survive the ongoing upheaval. But that’s not all bad news. Normalising price levels and an increase in professionalism among market players could actually improve the market opportunities for many.

The increase in the cost of living and the persistent rise in rents will exacerbate social tensions. To defuse them, the real estate industry will have to sit down with policymakers and societal stakeholders to find solutions that move the “Alliance for Affordable Housing and Building,” which has yet to produce any tangible results, a step closer to the actual implementation of its housing development programs. 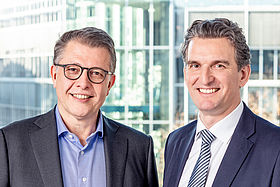